Afghanistan Should Take Advantage Of Its Cultural Resources Economically

With the rapid outbreak of the coronavirus (COVID-19) since the last quarter of 2019, the IMF forecasts a 6.1% fall in advanced economies’ GDP in 2020 while world trade is expected to contract by 11%. The economic downturn is alarming globally, but for fragile states the burden is even higher. Afghanistan is one of the poorest countries in the world, where over 55% of the population lives on the poverty line. In that context, inclusive development is ever more important as a key to building resilience to shocks. Such can be attained through a vision based on creating sustainable opportunities.

Afghanistan’s economy has deteriorated for the past four decades. Mass displacement, destruction of infrastructure, the growing shadow economy, and disruptions of public services all mar the prospects of the country. Concurrently, Afghan cultural wealth was damaged by extensive looting of artefacts and the wanton destruction of monuments. Thus, adversity hindered the development of Afghan assets: the youth have been excluded from the market, triggering a loss of workforce to other countries, while insufficient earnings through culture harmed Afghanistan’s stand in modern trade, causing a trade deficit of about 30% of GDP. In turn, perceptions of Afghanistan tend to be oblivious of all the country has to offer: a rich agricultural potential, rare earths and minerals, artefacts, to cite but a few. Seen as a country at war, Afghanistan has been forgotten as a land of opportunities.

Despite some improvements over the last 20 years, the Afghan economy has a long way to go. Industries and the service sector are yet to be developed. In spite of improvements in infrastructure, farming remains an unstable source of revenue, vulnerable to fluctuations caused by nature (recent draughts come to mind) as well as humankind (crime and conflict). Many who work in agriculture are informal workers, adding to their precarity. And it’s not just agricultural workers: 80% of employment as a whole is insecure. Meanwhile, tax collection has improved but the government draws two thirds of its budget from foreign aid and may not be able to manage it effectively. All in all, little was done towards incorporating culture as a means of economic development, overlooking the benefits of culture to generate income opportunities and to create a long-term prosperous environment. 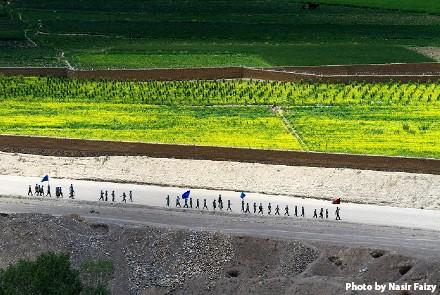 Yet, historically culture and economics have flourished hand-in-hand in the country, a powerful lesson that Afghans can learn from their past. Afghanistan was once a strategic step along the Silk Road which connected large swathes of Eurasia and contributed to the spread of economic and cultural goods between East and West. While not a major trade route in terms of volume of goods exchanged, it was a foremost corridor for the diffusion of arts, values and skills. Technologies and ideas that travelled along the route were adapted, making new innovations possible and driving world economic growth. All the while, economic surplus nurtured culture. Rich oasis kingdoms along the route became cradles of culture, as prosperous rulers patronized tangible and intangible cultural goods. Monuments, arts, craftsmanship, poetry, all bear witness to the cultural legacy of such economic hubs.

Such a model seems like one the private sector in Afghanistan and beyond should wish to emulate. Anchoring growth on high value productions instead of very dense exchanges of low-quality products is particularly relevant to economies that want to adopt the sustainable paradigm of economics. Craftsmanship, heritage and sustainability all resonate with the forward-looking economies of the 21st century, weary of fast consumption and obsolescence. Yet, tomorrow’s economy should go a step further from the Silk Road model. While in the past the exchange of luxuries enriched states and stimulated domestic demand to a limited extent, trade remained the precinct of big merchants.

Currently, Zazi-vintage, a Berlin-based company, is one of the few existing models successfully promoting craftmanship and socio-economically empowering artisans in the Silk Road region. The head, Jeanne de Kroon, is highly inspired by the rich cultural heritage of the Silk Road and works with female artisans, co-operatives and NGOs in India, Mongolia, Uzbekistan, Tajikistan and Afghanistan. The company produces sustainable fashionable attire including dresses, coats, jackets and more while sharing stories from the region. Afghanistan’s rich fabric resources and skilled tailors provides for both high-quality craftmanship and at the same time creates a cultural and artistic bond with the consumers and beyond globally.

While this is one of the few success stories on culture generating income opportunities, looking into the future, we must foster larger-reach development by turning an elite economic scheme into a locally-owned sustainable model. Using the ties of culture, education, and economics will help us reach that goal. For example, the production and trade of quality cultural goods such as Afghan carpets, cashmere, embroidery, and semi-precious stones such as lapis lazuli, can improve people’s livelihood by generating a sustainable income. The best way to develop such opportunities is through early engagement with the youth so as to build capacities and spread best practices in the field of culture and economics. At the other end of the chain, efforts are needed to reinforce the links between Afghanistan and the world in order to enable an environment conducive to trade and cultural creation.

Empowering individuals to become owners of their development make them contribute to society’s successes at large. Culture is what brings people together and connects generations, conveying a sense of dignity and inspiration to all. By linking culture, education and economic development, we can turn Afghanistan's assets into drivers of economic prosperity and make Afghanistan a strong partner in development that carves a richer common future.

This article was originally published for TOLOnews on June 04 2020.